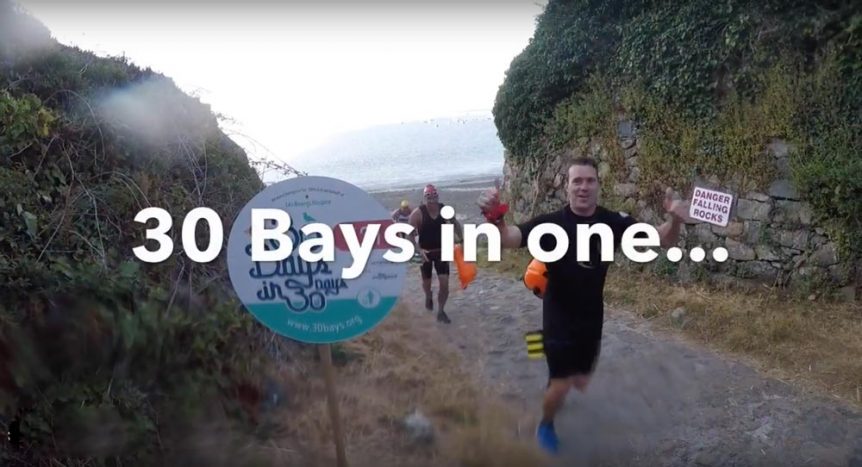 Seven friends gathered at dawn on a south coast beach in Guernsey, on a luminous Sunday to set themselves a challenge.

On July 15th 2018, Jim Elliott and a group of his friends accomplished the 30 Bays in 30 Days swim challenge in just ONE day.

So, you think it was easy? Well, it wasn’t quite what you might imagine, so please read on…

Without the use of any transport whatsoever, they dived into the bays, ran on the steep cliff paths and dashed along everything else in between swims. Jim and his friends completed the list of bays in just 6 hours and 50 minutes.

With a 5:30am start on the south coast at bay #23 (Petit Bot), they made their way anti-clockwise around the island.

“It was a bit of a race against the tide going out too far,” Jim explained, “as it’s difficult to swim on the west coast at low tide on a 0.9m tide. It also adds quite a bit to the run, to get to the water and back!”.

When we asked Jim which bay he’d enjoyed the most, he told us:

“Probably some of the northern beaches which we haven’t swum before. Bordeaux, after a long run up the east coast was lovely and Fontenelle, but on a day like Sunday, they were all great.”

All this sunshine we’ve been having is definitely helping! A really wonderful way to spend a summer’s day.

The friends are a part of the Open Ocean Swimming Club and are training for a swimming and running event around beautiful Lake Annecy in France this October. Bonne Chance!

They have a Just Giving page for raising funds for The Friends of Les Bourgs and Les Bourgs Hospice.